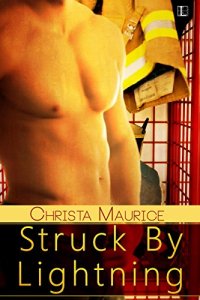 Sometimes a dream life is really a nightmare.
Rebecca has big plans. She’s going to be a famous artist, even if she has to sell her soul to do it. And so far, it’s working for her. She’s gaining notoriety in local art circles, but the “crap art” she’s selling makes her miserable. Ducking into the local fire station during a rainstorm, she finds the perfect way to distract herself–a hot firefighter with a big ego begging to be toyed with.

Dan would be the first to admit he has a big ego, but there’s something about Rebecca…

Hunting her down after that first kiss in the rain turns out to be the easy part. Making her happy might be impossible. But Dan is willing to do whatever it takes, including helping her buy back her soul.

“Your parents are here?” he whispered as he bent to kiss her.

“You have no idea how happy I am to see you, hero. Play along and you’ll get a treat,” she whispered back. “Look, Dan brought flowers.” She plucked the flowers out of Dan’s hand and turned back to her parents, brandishing them. Gas-station flowers. If he’d known her parents were here, he’d have at least stopped at the grocery store.

“Dan, this is my mother Maria and my father Lee.” Rebecca laced her arm through his, pulling him into the room.

Dan forced his feet forward. They wanted to go in the opposite direction. He wouldn’t have minded adding some screaming to that run either. Lee’s forbidding expression didn’t help. He thrust out his hand. “Nice to meet you.”

“Rebecca didn’t tell us she was dating anyone,” Lee said. It sounded like an accusation.

“We just started going out,” Rebecca shot back. “Didn’t we?”

Dan clenched his teeth. Technically, they hadn’t been out at all. “Yes, just started going out. I didn’t know you were going to be here.” If he wasn’t positive she hadn’t tricked him into meeting her parents, he would wonder, but there was no way she’d engineered this and she looked just as nervous as he felt. She was trembling. Maybe her father scared the crap out of her too. Dan slid his arm around her shoulders. “If I’d known you were here, I would have gone home and changed my shirt. I was helping a friend today.”

“That’s all right. We wanted to surprise Rebecca.” Maria folded her hands, glancing from her husband to her daughter. “If we had known she had plans we wouldn’t have come today, but since you’re here we can take you both out to dinner and get to know you.”

Funny, he’d been hungry a few minutes ago. “I don’t want to interfere with your plans.”

Rebecca clamped down on his arm.

“Don’t worry about it.” Maria’s gaze bounced from father to daughter again like she was watching a tennis match. Funny, since they weren’t the ones talking. “It’ll be nice.”

“Come on. I’m hungry.” Lee started toward the door.

“We’ll be right behind you,” Rebecca sang. “I just have to get these flowers in some water.” She busied herself at the sink.

“What’s going on?” Dan asked when he judged her parents’ footsteps to be halfway down the stairs.

“My parents have come to try to talk me into moving back home and working in my uncle’s accounting firm. They think I’m living on ramen and cardboard. I’m sorry. I didn’t know they were coming. They were parked outside when I got home from the gallery.” She dropped the flowers into a glass and turned toward him. “Come on, hero. I really need your help.”

Review
“Christa Maurice is a new to me author, and I can say after reading this story that I will be on the lookout for other works by her. This was a refreshing twist to the normal HEA of romance, and it didn’t disappoint in the least.” – Long and Short Reviews