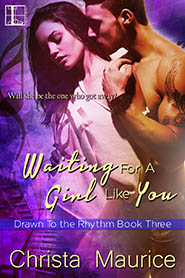 Marc is smart. Very smart. But he’s not the musician he wishes he to be. Much to Marc’s great misfortune, Jason is the musician he wishes he to be. Every damn day he has to wake up to the fact that he’s never going to have the gift that Jason does. Or even the gift that Brian does. He’s clever, but he’s not brilliant. He’s good, but he’s not great, and no amount of hours spent practicing or studying other great musicians is going to change that. On his darkest days, he believes that he’s the weakest link in the band. But he’s accepted what he considers to be his handicap and he’s making the best of it. His talent, whether he likes it or not, is business.

How can you not love a guy like that?

Marc is a tall, struggling ex-smoker. He’s older than the other members of the band by a few years so he’s always been the elder. There’s a lot of Joe Elliott (Def Leppard) in him, but without Mr. Elliott’s terrific case of foot-in-mouth disease. There’s also a smidge of Jonathan Cain (Journey). I tried to mix in a little Paul McCartney (do you need his resume?) which comes out in his defensiveness though. I know, I know, Paul McCartney? Defensive? Trust me. Or don’t and dig into the story behind “Silly Love Songs.” Lennon makes a smart ass, bitter remark in the press and Paul writes a hit song in his own defense.

OMG, Joe Elliott, Jonathan Cain and Paul McCartney all in one. I may faint.