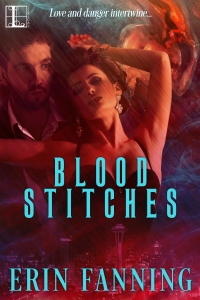 The earthquake hit L’Aquila, Italy on April 6, 2009. Maria D’Antuono, a resourceful 98-year-old, grabbed her knitting supplies and crawled under her bed. The stone house crumbled around her, yet, when firefighters found Maria 30 hours later, she was not only unhurt but continued to knit.

“At least let me comb my hair,” she said to her rescuers as they helped her to safety.

I read about Maria’s ordeal soon after I learned how to knit, and the events tumbled around in my brain, eventually blending into a history of magic and needlework. What if you could not only knit your way to safety but also create a disaster through knitting?

The story somehow intersected with my interest in Mexican culture and mythology. From there, I discovered the Mayan twin myth and the battle with the demon Vucub Caquix. Bit and pieces of Mayan mythology adhered themselves to my imagination, morphing into an adventure that delved into the Mayan underworld.

It wasn’t long afterward that my novella, Blood Stitches, pushed its way through my fingertips.

And that seems to be how inspiration works, at least for me: an article read and filed away, an overheard conversation, or a hike down a tree-shrouded trail, where shadows seep into my imagination. It’s a reminder of the vastness of the world–an endless source of ideas–and how there will always be authors, hopefully with the resourcefulness of Maria D’Antuono, molding inspiration into entertaining tales.

It’s called El Toque de la Luna—The Touch of the Moon. At least that’s how nineteen-year-old Gabby’s older sister, Esperanza, refers to the magical powers she inherited from their Mayan ancestors. Esperanza says women with El Toque weave magic into their knitting, creating tapestries capable of saving—or devastating—the world. Gabby thinks Esperanza is more like touched in the head—until a man dressed like a candy corn arrives at their Seattle home on Halloween. But “Mr. C” is far from sweet…

Soon, Gabby and her almost-more-than-friend, Frank, find themselves spirited away to a demon ball, complete with shape shifters—and on a mission to destroy Esperanza’s tapestries before they cause an apocalyptic disaster… And before it’s too late to confess their true feelings for each other

Erin Fanning spends her summers on a northern Michigan lake, where her imagination explores the water and dense forest for undiscovered creatures. In the winter, she migrates to central Idaho, exchanging mountain bikes and kayaks for skis and snowshoes. She’s the author of a mountain biking guidebook, as well as numerous articles, essays, and short stories.

Enter to win a Rafflecopter giveaway for a $20 Amazon gift card.