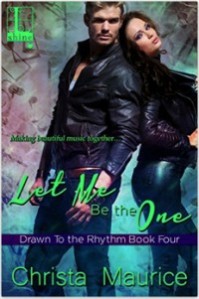 “Let Me Be the One” is a song by Def Leppard off the X album. It very nearly wasn’t the title of the book because I actually like the song “You’re So Beautiful” better. (I wanted to teach it to my kindergarten class in Korea for Mother’s Day, but ended up leaving that job to go to Chile before I had a chance.) Upon reflection, the title of this one fit my story better while leaving the outcome ambiguous, though if you are familiar with the song, the outcome of the romance is pretty obvious.

Most readers have commented on the scene when Suzi and Brian get lost and she spills her fear to him that Logan will get bored with her. She says she feels like she can’t breathe without him. Brian promises to be her oxygen. I admit I stole the line from the song. However, dollars to doughnuts, they stole the idea from Sweet’s “Love Is Like Oxygen.” I’m pretty sure if I dug in and did a little research I could trace that idea back to, I don’t know, Chaucer? Somewhere in the Medieval ballads for sure.

Ah, there really is nothing new under the sun.
Amazon : Barnes & Noble : GooglePlay : iTunes : Kobo Books