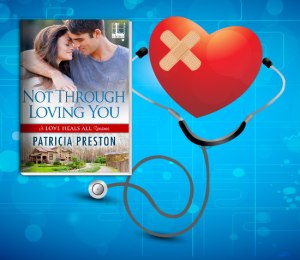 When a sickly infant is surrendered at the Lafayette Falls Medical Center, and orphaned soon after, pediatrician Aaron Kendall arranges to adopt him. After a painful divorce, the busy baby doc is about to realize his own dream of becoming a father when the baby’s beautiful estranged aunt turns up. She doesn’t exactly approve of the Kendall bachelor pad complete with Aaron’s cranky dad and wacky brother, forcing Aaron to form a risky alliance with her.

Country singer-songwriter Lia Montgomery barely knew her half-sister, but she’s determined her tiny nephew goes to a good home. If only she fit the bill herself, but her stressful life on the road is no place for a baby. Yet despite her misgivings, as she gets to know Aaron, she realizes the smart and sexy doctor is everything a child could want in a dad and more unsettling, everything she’s ever hoped for in a man. After all she’s put him through, is it too late to form a family and maybe put a song in the good doctor’s heart?

Aaron looked across the table at his brother and for a moment, all the fear and heartache bottled up inside him exposed itself in his voice. “I can’t go through losing a son for the second time.”

Stevie’s brow netted in a worried frown as he sat up straight. “Okay.” He tented his fingers. “So you’ve gotta get tight with the girl.”

“What are you talking about?” Aaron continued to squash the aluminum can. “I have nothing in common with Lia Montgomery.”

“You have the baby,” Stevie pointed out. “I know that’s not what you want, but it is what it is. And you need to make the most of it. Bro, women are not that hard. Listen to me. You’ve got this chick whose sister just died so she’s got all this guilt and grief going on. And then there’s the sister’s sick little baby. Okay, so what’s Lia gonna do? I mean, she’s family. She’s gotta do something or she’s gonna feel like crap about herself.”

“Stevie—” Aaron tried to cut in.

“You’re going at this ass-backwards by trying to scare her off. How’s that working for you? Acting like a jerk? No wonder she wants the baby transferred.”

Aaron threw the ball of crushed aluminum at Stevie, who caught it. “Just putting the truth out there,” Stevie said. “Of course, I know why you’re an asshole, but she doesn’t.”

Aaron glared at his kid brother, but he didn’t say anything.

“You gotta put on your sad face. Like this.” Stevie’s face crumpled so that he looked on the verge of tears. “It works every time. I promise.” He grinned. “You need to say you’re sorry for how things went today. Keep on the sad face. Then you tell her you really could use some help because the baby doesn’t have any clothes.”

“What? He’s in an incubator. He doesn’t need clothes.”

“It’s not about the baby needing clothes. For chrissakes, do you know nothing about women? It’s about shopping. The magic word. Shopping,” Stevie reiterated. “Tell her you’d like for her to pick out some clothes for the baby and, hey, decorate the nursery, too. She’ll go wild. Shopping for baby stuff. That’s like mainlining heroin for women.

“Tell her you want her to pick out some toys, too. And then you go from sad face to hopeful face. Like a dog waiting for a treat. And you say that with her help, you think you can be the best dad ever. Bingo! You win! She’ll be thrilled because she’ll get to feel good about herself and she’s getting to help with the baby. You got her hook, line, and sinker.”

“What’s crazy is you sitting out here, covered in sweat, having a pity party about the past. You’re missing the opportunity of a lifetime if you know what I mean. Call her.”

“You didn’t get her number? Holy shit.” Stevie threw the ball of aluminum back at Aaron who caught it. “You know, that’s standard protocol.”

“Maybe,” Aaron replied. “But in this case, she’s not available.”

Stevie leaned forward. “Every chick is available if you play your cards right, bro.”

Award-winning author Patricia Preston writes mainstream humorous romance, historical romance and comedy. She is represented by the Seymour Agency. Her newest titles are part of a standalone series, Love Heals All, for Kensington Books/Lyrical Press imprint. She has several other e-book titles available including a historical romance, TO SAVE A LADY, set in the French Quarter during the Battle of New Orleans. She also has a comic short story anthology, DIXIE DARLINGS, available in print. Besides writing she loves music, photography, graphic design, and visiting her favorite historical locales including the French Quarter and the Natchez Trace.