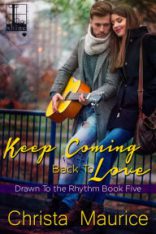 A love song in the making…

He was her high school sweetheart, the man Candy once dreamed of sharing her life with. But Ty was also a rock star on the rise with a flock of pretty groupies lining up to share his bed. So what makes Ty think that now that he’s ready to settle down, Candy will be his one and only? These days the single mom is older and wiser. Still, Candy can’t help but feel a stir of something at his hot pursuit….

Ty knows he’s got a lot to prove when it comes to winning Candy back.  But his rambling, rocker lifestyle has also shown him that she’s a woman worth fighting for. No one has ever come close to captivating him the way she did from the first day they met, a sweet-faced young beauty who brought out his every protective instinct. That’s why when Candy’s family is in crisis, he’s willing to risk everything for the woman he’s never stopped loving….

Her voice was all wrong. Hollow. She sounded like the night her dad hit her and he had to take her out of there. This was probably how she sounded when she called Ronnie the night Frankie hit her. “What do you mean June is sick?”

“She – a boy in her class has meningitis. She said she had a headache, but I thought she was upset because she got in trouble at school today and then she threw up in the parking lot.” Candy started to sob.

Tension wrapped around Tyler’s vocal chords. Meningitis was bad. Hospital bad. Chills ran down his arms. Christ, he hated hospitals. “Candy, where are you?”

Tyler slid his feet into sandals as he grabbed his wallet and car keys. “Are you in the kids’ ward or emergency or what?”

“I’ll be there in fifteen minutes. Is Joey with you?”

Great. No nanny support. “Tell me what’s going on.” He paused at the door long enough to set the alarm and lock up. Candy started a blow by blow recitation of exactly what was happening in the exam room that looped back on itself. As long as she kept talking, Tyler didn’t care what she said. In the background he could hear Joey crying. Traffic conspired against him. The fifteen minutes he’d promised stretched into twenty-five before he waded through the mob scene to the admitting desk. Half the city seemed to be in the emergency room where seven people in scrubs were trying to feel everyone’s glands and take everyone’s temperature at the same time. The guard at the door had shoved a small form in his hand when he walked through the door and a kid sneezed on him. Candy wasn’t even talking to him now. A nurse seemed to be trying to make her understand that she needed to hold June while they did a spinal tap and Candy wasn’t understanding.

“You could hang up the phone.” The admitting nurse pointed a long red nail at the cell phone still wedged against his ear.

“No, I really can’t. I’ve been talking to Candy since she called to tell me where she is and I’m sort of afraid of what will happen if I hang up.”

“Are you the child’s father?”

“The child is an orphan. Candy adopted her.”

The admitting nurse sighed. “Did you adopt her?”

Tyler scowled at the woman. Based on what he was hearing through the phone, the conversation had started below the Mason-Dixon line and was now headed further south. The nurse might have better luck if she spoke Chinese because then Joey might understand at least. Tyler walked past the desk and pushed through the doors.

“Hey! You can’t go back there! Security!”

The whole area was a warren of over bright little rooms half of which were blocked by curtains down the middle. He held the phone a little away from his ear trying to pick Candy’s voice out in the hall.

A huge black guy grabbed his arm. “Buddy, you can’t be back here.”

“Listen man, my ex-girlfriend is back here with her little girl who’s really sick and she’s fallin’ apart. She called me. You know how it is.”

The guard drew a deep, authoritative breath. “Yeah, come on. She the one with the two Chinese kids?”

The guard led him down another hall to yet another over bright room. He pulled the curtain back to reveal Candy open mouthed and baffled by what the nurse was trying to tell her, the nurse rapidly reaching the end of her tether, Joey wrapped around Candy’s hips sobbing like a baby and June laying hopefully half asleep on a table. Candy still had the phone pressed to her ear, but when the curtain moved, she dropped it and threw herself into his arms.

“They want to put a needle in my baby’s back!”

The nurse picked up the phone and rolled her eyes at the guard.