Really neat video for this one. 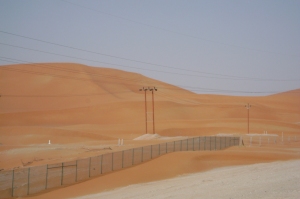 In case you were wondering, the sand is that color. I rode through that landscape daily for a year an hour each way.

Poor Agent Taylor. Originally based on a hapless version of Fox Mulder from The X-Files, he just can’t catch a break. He knows Max is up to something, but all he can get out of Max is a fake slob story and some really awful coffee. His mother thinks he should ask Rachel out, but she’s part of his investigation and to have her means letting the investigation go. What to do?

A long time ago in a city not so far away from where I am now, I was a huge X-Files fan. Huge. I remember working at the lamented Borders, assembling newspapers on Saturday mornings with my friend who was also a huge fan and discussing the previous night’s episode. For some reason I really liked the character Max Fenig. He was in three episodes and I was charmed.

Max Fenig: All I wanted in life was to be left alone; don’t we all. So just my luck that I’d eventually become an alien abductee. Now I’m never alone. Any minute, when I’m least expecting it ”

In the end, the only thing that remained of Max was the name. When he developed in my story, he became a little more stable and capable, and hunkier. Somebody a girl like Rachel could fall for.

Ranley, as the ever suffering, most capable member of her team, is merely having the worst mission of her life.

Max really likes Rachel, but what woman is going to want a guy totally obsessed with aliens? Then she turns up on his doorstep with an injured Extraterrestrial Biological Entity. Now they have to figure out how to help the alien without tipping off the FBI agent who has been surveilling Max.

Ranley is just hoping to survive overprotective dogs, stupid co-workers and well meaning superiors and get out of this situation with a couple of cool scars and a nice cushy lecturing job in Zenoexobiology.